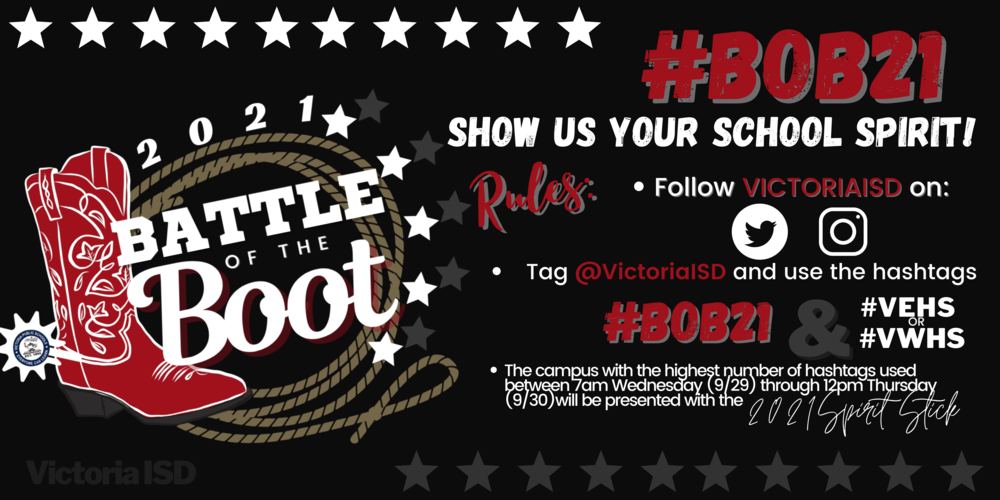 Battle of the Boot is back for its sixth year

Twitter is about to be flooded with #BOB21 as Victoria East and West High School students, staff and parents wage war against their respective rival during the 2021 Battle of the Boot.

This crosstown rivalry event is entering its sixth year, with Victoria East leading the way. Though the two schools have been playing each other annually since 2010, the Battle of the Boot was only introduced back in 2016. Since then, the East Titans hold a 3-2 advantage over the West Warriors.

The Battle of the Boot was created in an effort to promote school spirit, generate community involvement and ultimately build excitement for the East vs. West football game come Friday night.

This year, along with fun-filled spirit days at both high schools, there will be a Twitter war between the schools to see who has the most spirit. From Wednesday, Sept. 29, at 7 a.m., until Thursday, Sept. 30, at 12 p.m. the School Spirit Challenge on Twitter will be in full force. The rules of the competition are as follows:

All of the above requirements must be completed for an entry to count.

The campus with the highest number of hashtags during the time period above on Twitter will be presented with the brand new 2021 Spirit Stick at their campus on Friday. Students, staff, and parents are all encouraged to participate.

Victoria ISD is looking forward to a fun-filled week to be capped off on Friday night with an East vs. West showdown. The game is set for a 7:30 p.m. kickoff at Memorial Stadium.

To purchase tickets, visit https://spicket.events/visd. Please contact Chelsie Reeder, athletics secretary at 361.578.0289 or chelsie.reeder@visd.net with any questions or concerns regarding ticket purchase.